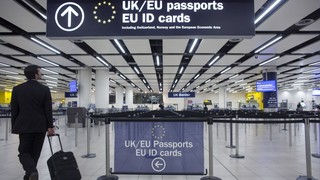 Is Brexit about nativism?

It’s not about ‘nativism’ it is about common sense. The Brits had enough of being ruled by unelected bureaucrats and voted to get their fishing rights back, be able to have their own judicial system away from the E.U and to trade with countries like India, Australia and the U.S away from the auspices of Brussels and their mega tariffs. Immigration of course comes into the equasion and there is a long way to go in ensuring that security is better in attracting the right people and avoiding terrorists who have fallen through the cracks, coming to Britain.

Brexit is about having ones own independent self governing sovereign state where the laws and and instructions don’t come from Brussels. The left just love to throw around stupid terms like Islamaphobia, xenophobe, and the like, and would happily open all the doorways into the U.K without any thought of the implications. The U.K has been swamped with migrants from Africa and the Middle East, and like other European countries, Germany, France and Sweden to name a few, it has been far from plain sailing as the pure scale and pressure on the welfare system has been almost untenable. The religious differences have also been a huge stumbling block in the quest for an effective multicultural society, with radical Islamists topping the drugs and violence tables. The non left Brits believe in “looking after their own” first, but completely accept hard working immigrants arriving in the country and contributing to the nation. The sad truth is that a huge percentage of migrants don’t feel that way and will abuse the system to its limit.