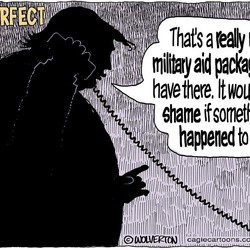 If running a government like a business means putting economy first-I am all for it.

Please, read this part of the article before you say anything:
“Businesses measure their success in profit. Governments don’t. Businesses offer products and services in exchange for money in voluntary transactions. Governments don’t. Businesses that fail go bankrupt and are disbanded (except for politically sensitive banks, automobile companies, steel producers, farmers . . .) while failed governments keep right on misgoverning in the city and state of New York, in Illinois, in New Jersey, in California, in Connecticut, in the District of Columbia, in Austin, and abroad. Businesses have customers. Governments don’t. Those who profess their desire to “run government like a business” most often mean that they seek to achieve a higher degree of administrative excellence and bureaucratic accountability than Americans are used to seeing from their governments. But that isn’t running government like a business — that’s running government like . . . Swiss government.”