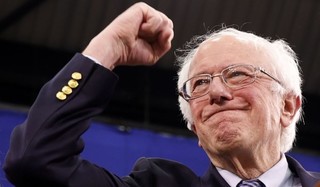 What if it is Bernie?

The Brits had their very own version of Bernie Sanders in Jeremy Corbyn, who was the hero to the woke left, demanded an open door policy for immigration, and surrounded himself with anti British candidates, in turn losing his core, established working class support, some of whom were Labour voters for more than a century! I can see strong parallels between these two radical left ‘personalities.’ It didn’t end well for Corbyn who was annihilated by Johnson in the General Election, I expect Trump to have the same success.

Even Dem moderates would rather have Trump serve a second term than having the untrusted Sanders on board, and their pension funds will keep rising under D.T!

Thankfully, Bernie Sanders will never tarnish the White House with his Socialist ideology. He’s had a good run (although Buttigieg is hot on his heels) but the prospect of Sanders as President frightens the life out of most Americans. Trump is still very much in the driving seat, employment figures are good, more minorities in work with higher wages, and yes, he has come out on top regarding Iran. Bernies 97 trillion proposal shows the folly involved in entertaining this old Commie, who will be happy to give out the ‘freebies,’ but without looking at the dire consequences to our economy.