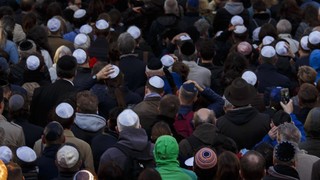 Why British Labour Party has a problem with Jews?

The British Labour Party, under Corbyn
has huge Islamic support, including
antisemitic members who seem to have
a deeprooted hatred for Jewish people.
Senior members have left the party in
disgust, and the racist element often
receive ‘a slap on the wrist’ and are
allowed to continue in their jobs!?
The marginalization and disrespect
shown to Jewish members of the
party, and Jews in general, is more
than unacceptable.
Corbyn’s position as leader is in jeopardy,
as John McDonnell’s militant arm of
the Labour party will replace him should
the election goes badly on Thursday.
Jeremy Corbyn has a huge respect for
Islamic terror groups like Hamas and
Hezbollah…he lay a wreath after the
Black September massacre, for the
Islamic terrorist!
These incidents…and there are more,
make Corbyn unelectable in huge
numbers around the U.K.

The Jews have a problem with the
Labour Party…a huge problem.
The anti-Semitism within Corbyn’s
ranks are well documented, as it
is in Labour’s interest to continue
open border policy to attract the
majority Muslim migrants, as they
will be future Labour voters.
It is all about getting votes.
This policy further alienates
the Jewish people for obvious
reasons.

Read the text, it is not only about having a problem with Israel. This problem has become much deeper:

“The Jewish Labour Movement’s submission to the Equality and Human Rights Commission’s investigation of Labour anti-Semitism provides vivid examples of how the normalisation of hatred for Israel goes hand-in-hand with contempt for Jews. Try to put yourself in the shoes of the Jewish Labour Party members who have been denounced by their fellow members as ‘Tory Jews’, or ‘child killers’ or ‘Zio scum’. Imagine sharing a breakfast table at Labour conference with two fellow comrades who say that Jews are ‘subhuman’ and they should be ‘grateful’ we don’t make them eat bacon every day. You don’t have to be a friend of Israel or even Jewish to feel like throwing up in the face of these two vile racists”