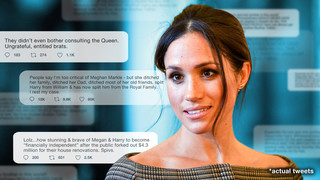 Meghan Markle was a victim of racism

The first question in that video: “Why do you think it has to do with the color of her skin?”

With the color of her skin? Her skin is white! What a nonsense?! Do you people have eyes? She is less dark than white Brazilian women.

4
FireStorm · a month ago

Exactly, the skin tone non debate is just an invention by the left to somehow deflect this privileged couple’s abandonment of the duties they signed up to undertake.

Duties? They had duties? I was not aware of that. The only duty I knew they had was taking photos.

What absolute unmitigated crap! Meghan Markle was absolutely adored by the diverse British public, and to play the race card and trying to paint the British press and public as racist, is offensive and verging on criminal…where does this nonsense come from from, Oprah? The British media were very active in following the couple’s lifestyle and showed obvious interest in Harry’s new woman, that is normal in a Sovereign Nation. Prince Harry was a huge favourite of the general public, and the Nation was delighted that he had found love, COLOUR was not an issue, why the hell should it be? The problem is that Harry and Megan have let down the Queen, the constitution, and themselves, deciding to become the new “woke” couple and undermining the duties they accepted when they were married. Harry, a veteran pilot in Afghanistan and a team player, has turned into a depressive, wimpy shadow of his former self and has betrayed his privileged position. Meghan Markle and her “woke” friends are more of an attractive option to this “depressed” couple than the prospect of doing their duty to the Crown. Personally, I am not so enamoured with Meghan Markle, she has a Wallis Simpson like hold on the former golden boy, and her friends include the aforementioned Oprah, the Clooneys, the Obama’s and the Clinton’s,so this “B” level actress has shown her political colours. Harry has allowed himself to be immersed into this new “woke” world and his has lost his mojo and respect, especially with his disrespect of the Queen. The “race card” nonsense is just an ill advised smokescreen to cover up the immaturity and lack of loyalty shown by this former golden couple.