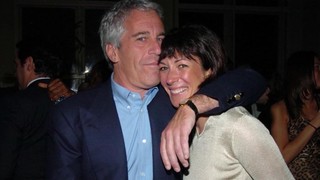 Where is Ghislaine Maxwell-former Epstein's girlfriend?

Robert Maxwell, Ghislaine Maxwell and
Jeffrey Epstein have alleged ties to
Mossaid.
Robert Maxwell, a foul man, and a
terrible bully, is well documented
as having Mossaid links, and after his
death, Ghislaine continued the family
tradition.
Epstein, was known for his paedofile
tendencies, and his ‘weakness’ was
allegedly used, in order to capture
‘A list’ perverts on video.
Ghislaine Maxwell recruited Giuffre
at Mar-A-Lago (Trump’s Palm beach resort)
with the promise of massage training,
she also recruited many Eastern
Europeans with the same promise.
This woman knows absolutely everything
about Epstein’s perverse operations,
as she was his number 2 (excuse the
accurate pun)…
It is no wonder that she cannot be found,
if she was to ‘do a deal’, there will be
ex President’s, Chiefs of industry, and
many other well known ‘faces’ nervously
looking over their shoulders.

So, if this the case, Maxwell will have
the police authorities and international
intelligence keen to talk with her.
I understand that Prince Andrew is only
the tip of the iceberg.

Sadly, I think Ghislaine has been murdered. Simply because she knew too much.