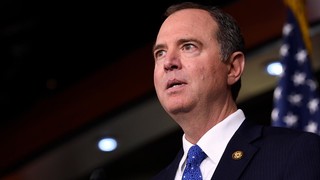 Schiff was against Clinton impeachment

Well, nothing strange about that.
First of all, circumstances were different. Clinton was impeached for what is a private matter. Trump for bribing a foreign president.
Secondly, impeachment is always political. And Schiff supported Clinton.

"“I think impeachment for most people in this district is only the most graphic illustration of an incumbent who has put the national partisan, ideological fights ahead of representing his district,” Schiff, then a California state senator, said during an interview with NBC at the time regarding Rogan’s role in the impeachment of President Bill Clinton. “People want to decide this on the basis of who’s going to serve our community.”

He was criticized by GOP for not representing his district. Such a hypocritical person.