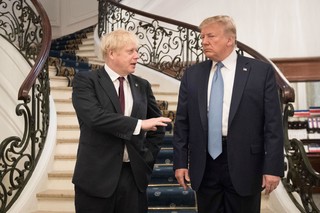 Is Trump interfering in the UK elections?

Not really, he has known Johnson and
Farage for some time, and it would be
of both Nation’s interest to discuss
A trade deal …post Brexit.
Obama was the seriel meddler before the
Brexit referendum, when he came to the
U.K and told the electorate that we would
be at the back of the queue should
we implement Brexit…for trade with
the U.S.