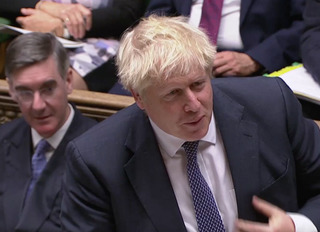 Brexit is becoming the’War and Peace’
in the U.K…it’s going on forever!

Johnson has missed the deadline for
getting his deal through. What option
does he have?

A General Election would be the fairest
outcome for the Electorate.
Many M.P’s employed to carry out the will of their constituents failed to do so after
the Brexit referendum win, so I would
expect many to lose their jobs and some
new faces. Add to that the Brexit Party
and Farage, it could be interesting.
Corbyn would lose a General Election at the moment, Swinson is a distant 3rd in the
polls. Tories have a healthy lead while the
Brexit Party is just behind Swinson’s Lib
Dems.
Both Swinson and Corbyn are insistent
on having yet another Referendum…the
people want a G. Election