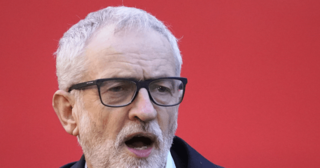 Corbyn facing "furor and despair" from his party

How can Corbyn possibly say that his ‘Socialist agenda won the argument’ but wasn’t implemented properly by the party? The majority of Brits, including Labour supporters, voted against Corbyn’s Socialist manifesto as it was overpriced and completely unrealistic. He has ruined his Party

The Labour Party will be selecting a new leader in the wake of Jeremy Corbyn’s disastrous election defeat. The problem they have is that there are several different factions within the Party. You have the Blairites, centre left, the militants led by John McDonnell and the Corbynista’s. The division within the Party has driven a wedge through any prospect of unifying the party, who are looking down and out. Corbyn’s central to this, in this shambles of a Party.

Corbyn’s outdated brand of far left Socialism will never appeal to anyone but the young middle class ‘champagne socialists’ and Asian voters, the type who light candles for domestic victims of terrorism, but support the perpetrators. He abandoned Labour working class heartlands in the North and in Wales, and his Brexit stance was completely unclear? Originally he was for Brexit but reluctantly changed his position on this. Corbyn and his MP’s arrogantly overlooked Labour voters who wanted Brexit…5 million of them. The people showed their contempt for this betrayal by handing hard core Labour seats to the Tories. Corbyn was also on to a loser with his Parties antisemitism, which was so serious that the Labour Party were only the second Political Party in British history who were reported to the race equality board (the first being the B.N.P in the 70’s). Corbyn also has sympathies for terrorist groups like Hamas and Hezbollah, and was not trusted in keeping the U.K safe ! His open door policy for immigration was unpopular in an already overcrowded U.K. Corbyn deservedly received a bloody nose at the General Election, and it could take Labour ten or twenty years to be in a position to challenge the Tories again.