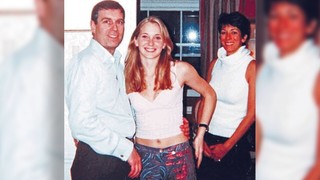 A shocking ordeal for this (then)
vulnerable seventeen year old to have
to go through.
The lawyers for Virginia Roberts, would
be wise in tracking down Ghislaine
Maxwell (Epstein’s ex girlfriend), and
partner in crime.
Maxwell initiated these sex parties and
was also involved in grooming the under
age victims.
The media report that ‘she is in hiding’.

I watched the Virginia Roberts interview,
and she came across as a believable
woman.
There is compelling evidence about the
disgraced Prince’s culpability in this
sordid episode.
Prince William is said to have been very
involved in axing his Uncle from Royal
duties. He is showing positive signs that
he has what it takes as the next King
when Elisabeth retires, rather than the
peculiar Charles, who is not held in
great esteem by the Brits, after his
behaviour when married to Diana.
As for Andrew, I hope that he is brought
to book, as he has shamed the country
by using his privileged position and tax
payers money, to engage in a lifestyle
unbefitting to a Prince.
Again, I hope he has to answer the charges,
but like the many other high fliers in
Epstein’s little black book, his lawyers
will be doing all they can to make sure
justice is not served.