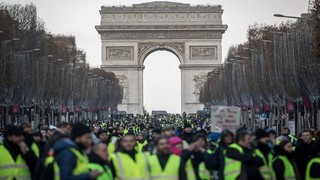 French Yellow Vests: One year on

Apathy has finally set in. In 2018,
300k demonstrators took to the streets,
now down to a few measly thousand.
The yellow vests will fade away.

Good piece. The Brexit/yellow vests v Paris/
London analogy is a good example of how
the arrogance of career politicians has
overlooked the working class.
Although the yellow vest movement has
shrunk in numbers, Macron will be
looking over his shoulder nervously, as
Le Pen’s popularity rises.
The Marxist Corbyn, and his Islington
elite, have ignored the working classes,
especially in the North of England, and
Wales, which opened the door for
Farage and the Brexit Party, who
appealed to these forgotten voters.
The rise of ‘Populism’ will continue to grow
despite the left and liberals spouting
propaganda against them, ('racists,
little Englanders), and questioning
the intelligence of these frustrated
voters.