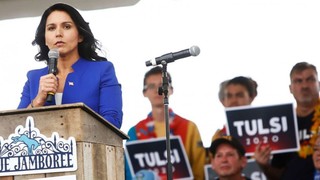 Gabbard should resign from Congress?

Tulsi Gabbard is one of the very few Democrats who have…integrity.

This Hawaii congressman is a joke. So why should she resign? Because she has conscience and is capable of thinking independently? She was expressing the opinion of the majority of Americans. OK, there was a wrongdoing, but the entire process is so deeply partisan and political that the person of honor, like Gabbard, could not vote for it.

The guy did not even care to explain why it was a “step too far”, that she voted present. Only because she did not respect party discipline, whatever?