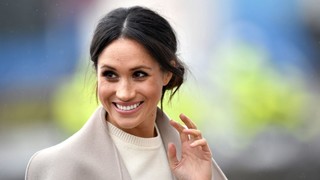 Meghan Markle wants to be the global Queen of Woke

Harry and Megan’s popularity has gone from “hero to zero” status in recent weeks with the British public, and leaves the Monarchy in a state of disarray. The Prince Andrew/Epstein scandal has marginalized Andrew, leaving him as “Prince” by name only, and now this “woke” couple are piling even more stress upon the beleaguered, rapidly shrinking Monarchy. If Megan Markle wanted to continue her lifestyle as a “C” grade actress, why did she commit herself to the Crown, publicity? Well she certainly has that now, and for all the wrong reasons. Harry has changed from a confident, public favourite into a simpering, supposedly depressed shell of the man he was, whilst jet setting around like he’s a hollywood playboy. A huge embarrassment for the Royal family, and a betrayal of the highest order from this weak couple.

What a contrast with the hard working mother of three Kate Middleton. She has undertaken her Royal duties with dignity and intelligence. Prince William and Kate have shown their maturity and realise what is expected of senior Royals. The Queen will be absolutely livid with the dishonour shown by Harry and Megan.

Hard working? Hhaha, you must be joking! Hard working are those mothers of three who wake up at 6am every day and go to work, who have to work 3 shifts to survive, who do not have nannies to take care of their kids. Not privileged girls whose only job is to look great in photos!

Megxit (brilliant!), has turned Harry into a “woke bloke”???. As some English posters have commented; “she must be a wow under the duvet.” Harry has gone from being a military hero/team player and a Royal favourite, to an emotional, pussy whipped puppy. But hey, he and Megs are now brushing shoulders with the likes of Oprah and the clueless Clooney’s in their new wokeness world. Megxit knew very well what marrying into the Royal Family entailed, but played the race card, after being adored by the British public, citing depression due to media bullying, poor dears! It is a disgrace that Harry spoke with the media before having discussions with the Queen regarding his withdrawing from Royal life and emigrating to Canada. This privileged man has said he wants to live independently, and not take any freebies from the Royal treasury. What about the properties, paid for by tax payers, his Duchy of Cornwall payment and all the other perks, and of course the sky high travelling expenses incurred while flitting to one woke event after another. I hope Harry comes to his senses and starts to use his head rather being ruled by his heart. And yes, Markle comes across a latter day Wallis Simpson with her influence over Harry, who has completely undermined the Sovereignty.