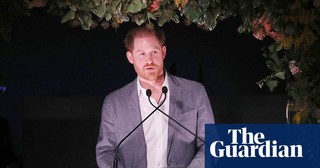 Prince Harry: We had no choice

I predict that Harry will be all alone with Archie in his Canadian log cabin, wifeless and pining for previous Royal life… within 3 years.

I have no idea about Royal protocols…but can he come back? I mean…after he is dumped by Meghan, which should happen in the next 2 years at most…can he go back to his royal duties, business as usual? Or this is irreversible…

2
FireStorm · a month ago

I hope they are happy, I really do, but Harry looks a pale imitation of the dashing, brave soldier flying helicopters around Afghanistan. At least he will be able to sit at home with baby Archie, while Meghan cashes in.

Of course Harry and Meghan had a choice, they wanted ‘freedom’ with a cherry on top and they got it. Harry says he is saddened that they have “sacrificed their Royal duties for freedom,” what a lot of nonsense! They have defecated on the great traditions of monarchy, from a great height, Meghan married into the Royal family, knowing what was expected of her, and then decided it would be more difficult to continue her liberal, woke lifestyle…and played the media aggression, and more predominantly, the convenient race card…which the Brits are not guilty of, they adored Markle.These spoilt brats won’t be concerned about losing their titles, and their endorsements (although Harry will still receive ‘pocket money’ from Charles). They will still cash in on the Royal connection whilst picking up lucrative deals through Disney, Netflix and will be free to fly around the world on their private jet to talk about climate change. The Queen will be delighted for them.