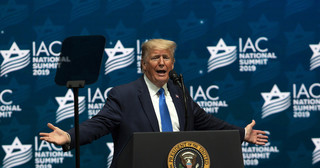 How could someone whose son-in-law is Jewish be anti-semitic?

1
chopsuey · a month ago

Considering he didn’t have a jewish son-in-law until 2009. If he is or isn’t anti-semitic, he would have had his prejudices way before the age of 59.

How is this anti-semitic?
He was talking to the audience of Jewish business people.
“On Saturday, speaking before the Israeli American Council in Hollywood, Florida, President Trump engaged in the anti-Semitic trope of a Jewish obsession with wealth. Discussing Senator Elizabeth Warren’s plan for a wealth tax, he said that Jews in the audience should “be my biggest supporters because you’ll be out of business in about 15 minutes”

So he was not exploiting any anti-semitic tropes. He was stating the truth.