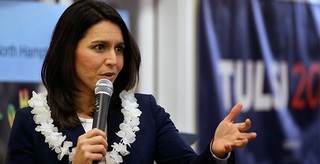 Gabbard on impeachment: You cannot make up the rules

...
townhall.com/tipsheet/bet
GardenRose · a month ago

I do not understand why Gabbard is talking about “making up the rules”. Which rules were made up? There is nothing in the rules that would oblige Pelosi to send these articles of impeachment right away. She is entitled to keep them for as long as she wants. On the other hand…if the Republicans attempted to change these rules in order to force her to release those articles…now, that would be called “making up the rules”.

Gabbard is obviously “flirting” (politically) with the Republicans here. I would not be surprised if she joins them soon.

Gabbard is the one of the few Democrats to go with the courage of her own convictions.