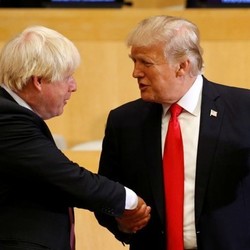 So much of this shambolic, so called,
impeachment investigation is based
on hearsay, and Schiff’s ‘interpretation’.

Stop it once for all!
Fact number one: The whistleblower overheard Trump’s problematic call
Fact number two: In this phone call, Trump was only talking about “investigation” not about corruption in general
Fact number three: A number of career diplomats (non-partisan) testified that there were concerns about Ukrainian aid being withheld.

Fact number four: Military aid was released only after federal lawyers said that withholding it was illegal.

And fact number 5, Obama didn’t release
aid to Ukraine, when in office, so the
real ‘quid pro quo’ has been completely
overlooked.
Trump derangement syndrome at it’s
most crooked.